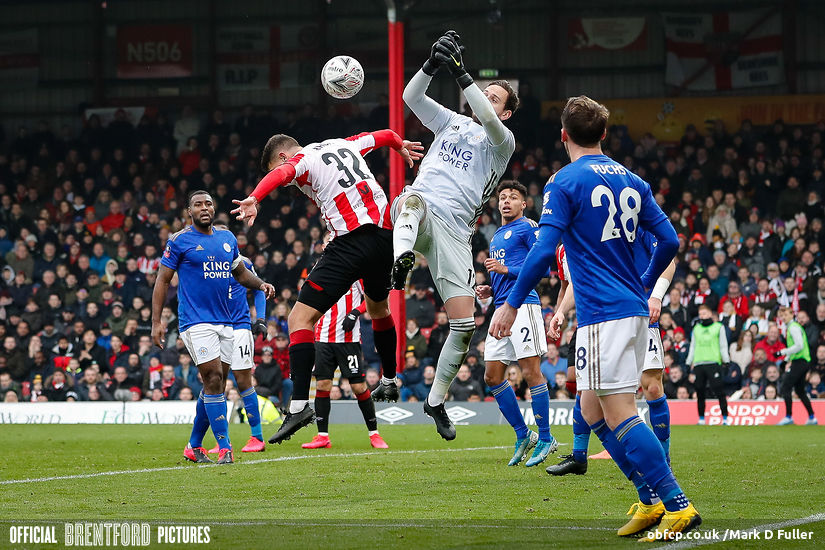 Bill Hagerty sees a young Bees side rattle Premier League Leicester before a knife-edge defeat in the FA Cup.
Share |

Defeat in a thrilling match against a heavily shuffled Leicester combination – half-a-dozen may have been unfamiliar names but displayed quality that must demand regular first-team consideration any time soon – was hardly a disgrace. Frank’s team, overall so young that it might be argued that the early kick-off was necessary to ensure they got home before dark, produced a performance to warm the heart and give the hot favourites increasing bouts of the jitters.

Brentford’s head coach was therefore able to sort out his stars of tomorrow, or maybe the day after, from the honest toilers who patently require more nurturing before graduating to the big league. Among the former, Emiliano Marcondes, a far more commanding presence since his loan period in Jutland, and Jan Zamburek, the 18-year-old dazzling Czech, both showed that they are knocking loudly on the first-team door.

This can be considered a result for Frank, who knows that he and his players must keep their eyes on the big prize: elevation to the Premiership come May this year to celebrate the move into the club’s spanking new stadium next term.

This looked a dream too far for the first fifteen minutes or so on Saturday. Most of the home defence might well have been still tying their bootlaces as Ayoze Perez burst through, only to be foiled by Luca Racic. There were obviously lessons to be learned, but they weren’t in time to prevent Dennis Praet’s pin-perfect diagonal ball – quite likely the best pass of the season so far – putting the defence in the mincer and allowing Jamie Vardy  replacement Kelechi Iheanacho to turn in Jamie Justin’s cross.

Four minutes gone and nothing to look forward to other than a terrible peppering verging on a masterclass by Leicester’s largely second string. But as happens so often with Brentford teams, they painstakingly began to weld together a more resolute defence and a creative midfield. Newly-arrived striker Halil  Dervisoglu, initially a little boy lost up front, started to show touches that proves he shares with Bryan Mbeumo subtle skills as well as a surname difficult to pronounce. Leicester didn’t seem to notice, but they were about to.

Following the interval, the Bees dominated much of the action. Just occasionally the defence appeared to become momentarily petrified, but soon it was noticeable that Leicester were conceding frequent free kicks and looking as though they would prefer to be somewhere – anywhere – other than finding themselves driven on to their collective back foot by a team with their tails up.

A penetrating long ball from Marcondes was diverted by the faintest intervention from Dervisoglu on to a post. Racic bulldozed his way up front to unleash a volley that keeper Danny Ward finger-tipped over the bar. Mbeumo replaced a subdued Joel Valencia and within minutes had the ball in the net, only to be denied by the offside flag of pony-tailed assistant referee Sian Massey-Ellis.

The home crowd in full throat was a delight to hear and the sight of the Foxes – or, following their stunning Premier League championship in 2016, the Unbelievables – vigorously disputing the awarding of a corner to the Bees as a pulsating game drew to close gave some compensational pleasure.

What do you think of Brentford’s young lions, I asked my constant companion?