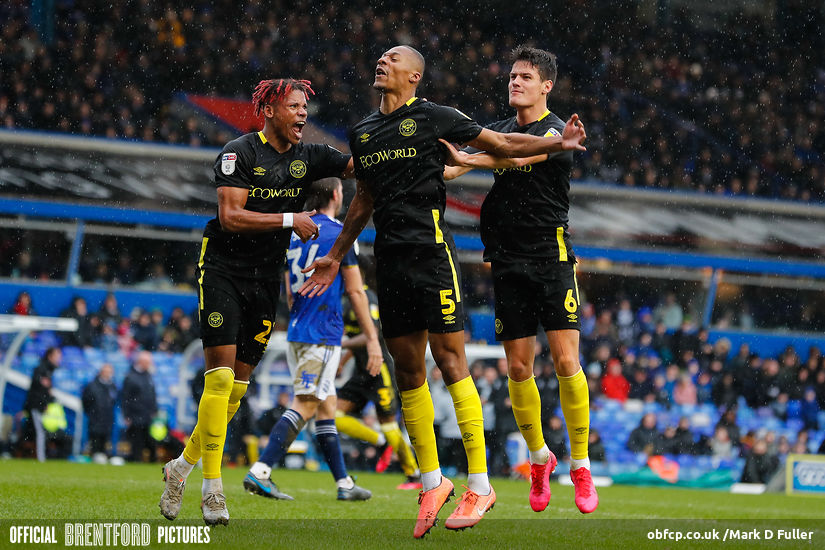 Donald Kerr joined the 1577 Bees fans who travelled through Storm Dennis to see Brentford get a valuable away point.
Share |

For the second away game in a row, the weather played a major role. Arriving at St Andrews in powerful wind and rain didn’t bode well for the beautiful game and, although the conditions seemed slightly more benign in the stadium than around it, the fear was that Brentford might find it more difficult than the hosts to play their natural game. The team sheet must have also concerned the travelling fans with both Brian Mbeumo and Josh da Silva missing from midfield, replaced by Shandon Baptiste and Emiliano Marcondes. It was surprising to some that Josh had recovered from his injury against Leeds on Tuesday evening and was on the bench, but, in fact, he didn’t survive the warm up and was replaced by Halil Dervisoglu. All in all, both weather and forced changes might be conspiring to break our recent run of form.
The early exchanges did nothing to dispel this apprehension, with young Bellingham tearing through us and Jeremie Bela also proving a handful in the opposition midfield. Within minutes of the start the former had struck a post and the latter had dribbled unopposed through our midfield. Scott Hogan was busy up front, and the suppporters’ natural fear of an ex player coming back to haunt his previous employers looked well founded. To make matters worse, Mathias Jensen limped off after no more than nine minutes to be replaced by Dru Yearwood, meaning that, apart from Christian Norgaard, we had a completely new untested midfield, and we were showing little signs of dealing with a very aggressive and effective Birmingham attack. Their goal, when it came on 13 minutes was disappointing but hardly a surprise, a lovely passing movement breaking down their left and a quick cross which, with a clever dummy from Hogan, presented Jutkiewicz with a tap in. We might have expected a long ball game with plenty of set pieces with his head on the end of them, when in fact we were beaten by a goal we would have been proud of ourselves. Fortunately, we saw little of this passing game from Birmingham thereafter and following our equaliser four minutes later both teams reverted to type, and we found it much easier to cope. The goal itself came from a corner which went beyond the players in the goalmouth  and was headed in by Ethan Pinnock. We’ve seen him head back from this position for others to finish but in this instance he saw the gap and beat the goalkeeper on his near post.

From then on,  the Bees grew into the game and although Bellingham, so impressive for one so young,  remained a threat, Bela was much less effective than in the first quarter of the game. The main danger came from long throws by Marc Roberts, some of which were hurled into the box from just inside the opposition half. My heart sank every time we conceded a throw in as it seemed inevitable, like the innumerable corners from Leeds in the first half at Griffin Park, that one would force a breakthrough. However, we repelled everything literally thrown at us and the half ended with the promise that we might have more success after the break. Shandon had struggled to cope with the pace and aggression in the early part of the game but seemed to be coming to terms with it as the half progressed and Dru looked increasingly comfortable breaking up play alongside Christian and pushing us forward. Emiliano, who has looked a different player since his return from Denmark was causing problems for Birmingham on the wing, not his preferred position, and Said Benrahma and Ollie Watkins were both benefiting from improved service. A fierce shot from Said was brilliantly saved just before the whistle blew and such was the display by both teams,  most of us had almost forgotten that the conditions were far from perfect.

Birmingham started the second half much as they had the first, but with our 1500 supporters making it feel like a home game for David in front of them, there seemed less likelihood that they would actually score. And as the game went on, Brentford became stronger and put together some very nice passing movements cutting through the opposition. Dru, having come on much earlier than expected, and having worked ceaselessly for well over an hour, was himself replaced by Tariqe Fosu and as he moved on to the wing, Emiliano moved into his more natural midfield position. Scott Hogan was replaced five minutes later, having picked up a knock, and, although he hadn’t been as dangerous than in the first half, Birmingham seemed much less threatening as a team after his departure and replacement by Dan Crowley. The big memorable chances all fell to Brentford, with Emiliano guiding a header towards goal, every Bees fan waiting for the net to bulge, only to see Lee Camp pull off an excellent save. Fosu was suggesting that, along with the more impressive second half Baptiste,   he could be a very strong addition to the squad, and was very unlucky not to score. His shot, which came back off the post, prompted a scramble in the box where successive shots failed to cross the line. Last line of defence fouls by a couple of Birmingham defenders brought them both yellow cards, and Christian responded in kind with a very professional foul that broke up a promising attack towards the end of the game. The game became increasingly scrappy but we were up for the scrap and gave as good as we got. This is a new side to Brentford and as Ethan said in his BBC interview afterwards it demonstrated that we are able to play all aspects of the game.

All in all, it was hardly a classic but, given Storm Dennis it was unlikely ever to prove one for the purists. We played some nice football but we also scrapped well. Our new recruits all stepped up to the plate and, on an afternoon when only Leeds of the top seven teams won, it was a very good point, and kept us well in contention. It was a testing drive home but a contented one.