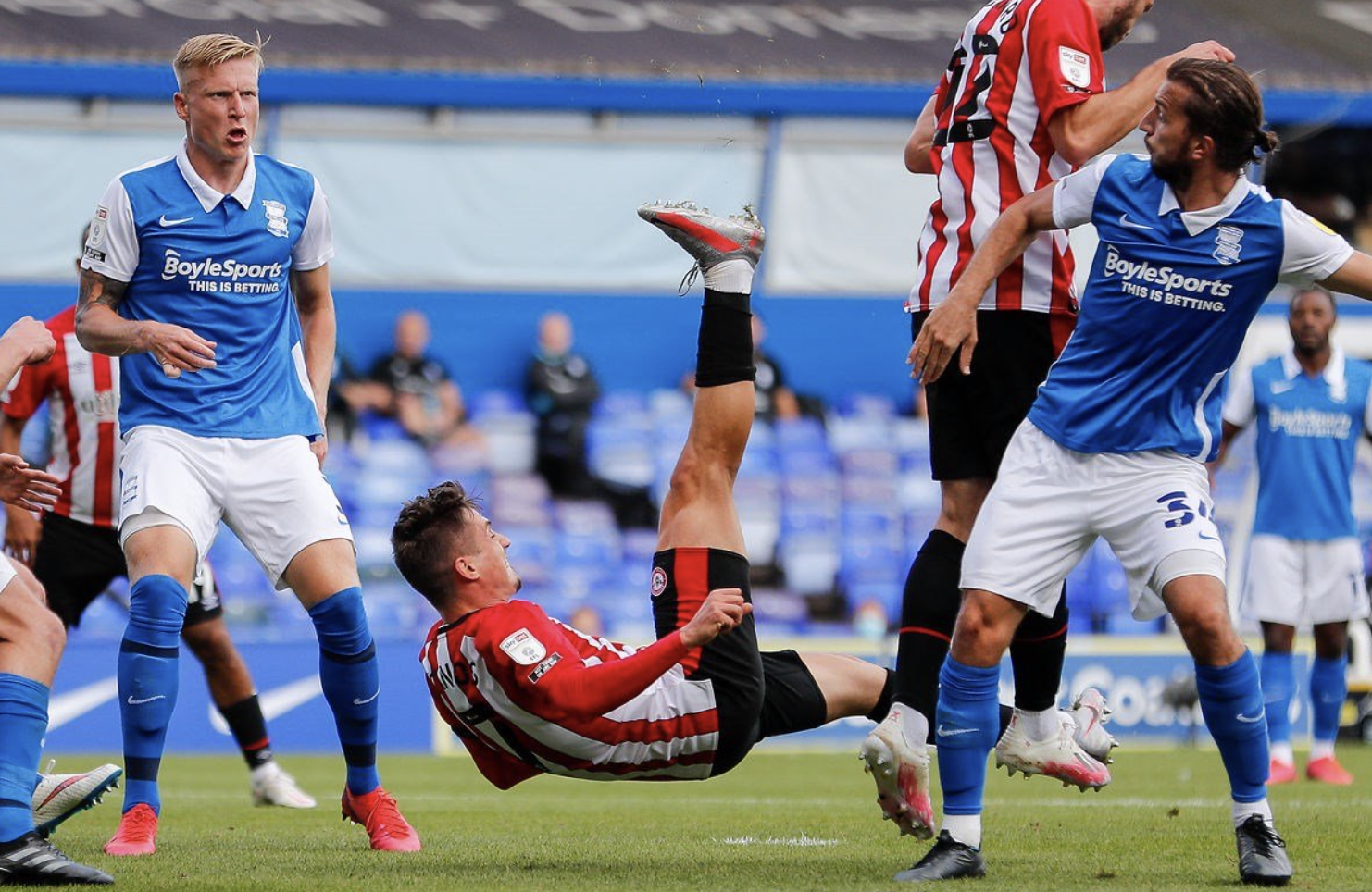 Brentford had chances that could have earned them victory in the season opener but it wasn't to be. Stewart Purvis was there.
Share |

On last year’s opening day in the Championship, in the first game of the final season at Griffin Park, the Blues beat the Bees with their only shot on target, a header from outside the box that looped past David Raya . This year’s opening match saw Brentford again lose by a header, this time past Brentford’s number two keeper, deputising for an ‘injured’ Raya. This was not the freak result of last year, Birmingham earned their win but Brentford had more chances and with better execution should have won it.

Meanwhile Raya’s agent, Jaume Minell, was telling the Spanish sports paper Marca that ‘Arsenal have tried to make a proposal to Brentford, which for the moment refuses to negotiate since the player has a contract in force until 2023. The footballer, however, wants to get on the train of the Premier League’. The departure of Arsenal’s number two keeper Emi Martinez for Aston Villa will have only increased the rumours that Raya is going to catch  that train.

If Raya is now in the ‘going?’ category, then Said Benrahma -also not in the squad today- seems to be in the ‘almost gone’, Ollie Watkins definitely having ‘gone’. So this was a day to be looking ahead to how the rest of Brentford’s squad, reinforced by the arrival of Ivan Toney up front, will cope without them.

Birmingham City have had their own high profile departure with 17 year old midfielder Jude Bellingham gone to Borussia Dortmund. New Head Coach Aitor Karanka has made signings such as his Boro faithfuls George Friend and Adam Clayton plus experienced Spanish wide player Ivan Sanchez. And Karanka started 19 year old local Zach Jeacock ahead of a more experienced goalkeeper. Two former Brentford players signed in one of Harry Redknapp’s last big splurges- Harlee Dean and Maxime Colin – are still at St Andrews, joined by Jon Toral who had a loan spell at Griffin Park.

There was a setback just five minutes into the game. Christian Norgaard started what looked like a promising move in the centre circle, slipped it to Mathias Jensen beside him but instead of kicking the ball his fellow Dane connected with an opposition boot. Immediately he went to ground in pain, after treatment he went off but on his return he immediately began to hobble and had to withdraw. He was replaced by Emiliano Marcondes.

Birmingham signalled their intentions when Luke Daniels had to make a good save after Bela shot from the edge of the box. The Blues’s other main intention was to single out Christian Norgaard, Denmark’s Man of the Match against England this week, who became a marked man in every sense. Referee Tony Harrington took a lenient view of these tactics, a blatant late tackle  on the Bees play-maker caused a crunch that could be heard in the stands but apparently didn’t deserve a yellow card.

Norgaard and Josh Dasilva were impressing at times in midfield, Josh hitting the post after a characteristically powerful run forward, and there were nice touches further upfield from Sergi Canos standing in for Said Benrahma on the left flank and over on the right from Bryan Mbeumo, playing his best half for some time. It was Mbeumo who set up Dalsgaard for a run and collected the return ball but blasted it well over. It wasn’t quite the open goal some thought, there were plenty of bodies that might have blocked an on-target shot.

There were fewer chances for Birmingham, thanks to Pontus Jansson blocking Toral and Toney heading off the line. Defensive headers are said to be one of his skills. Seven minutes before the break Brentford could have done with them when a corner came over from Sanchez. The Bees were very focused on the tall men the Blues pushed into the box but it was one of the smallest, Jeremie Bela, who ran in unmarked to angle the ball past Daniels into the corner of the net.

Just before half-time Norgaard was again in the wars, this time as he and Harlee Dean both went to head the ball in the box. Christian came off worse, the replay suggested it had been a firm but fair challenge by the former Bees centre-back.

The second half repeated the pattern of the first, the Bees made more chances and hit the woodwork again. The familiar free kick routine of a high ball to Ethan Pinnock and a cross box header fell to Canos back to goal but his overhead kick hit the crossbar.  Then a good Canos cross created chances for Marcondes and Toney but both were beaten away by the young keeper Jeacock. Dasilva played a great ball for Mbeumo but there was nobody to put away the cross.

Birmingham made more robust tackles and some were even punished in this half. Adam Clayton tried to rugby tackle Dasilva and when at first he didn’t succeed he tried again, finally felling the midfielder.  A Blues fan tweeted  ‘Adam Clayton playing scrum half’.

Brentford went two up front with Forss joining Toney and Fosu taking over from Canos on the left. There was one final chance when a corner seemed to be heading straight for the flying forehead of Pontus Jansson but his header went down into the ground and bounced over the bar.

‘We dominated but we couldn’t score’ said Thomas Frank afterwards. ‘We had the chances but we didn’t take them’ according to Henrik Dalsgaard.

One incident near the end summed you the game for this observer. A battle cry of ‘three points’ echoed across the main stand as a Birmingham player urged his colleagues to achieve their first victory since February. For their fans this win was a big deal, for Bees fans it felt like a return to an ordinary Brentford away defeat. Few will regret they weren’t able to come on the away-day.