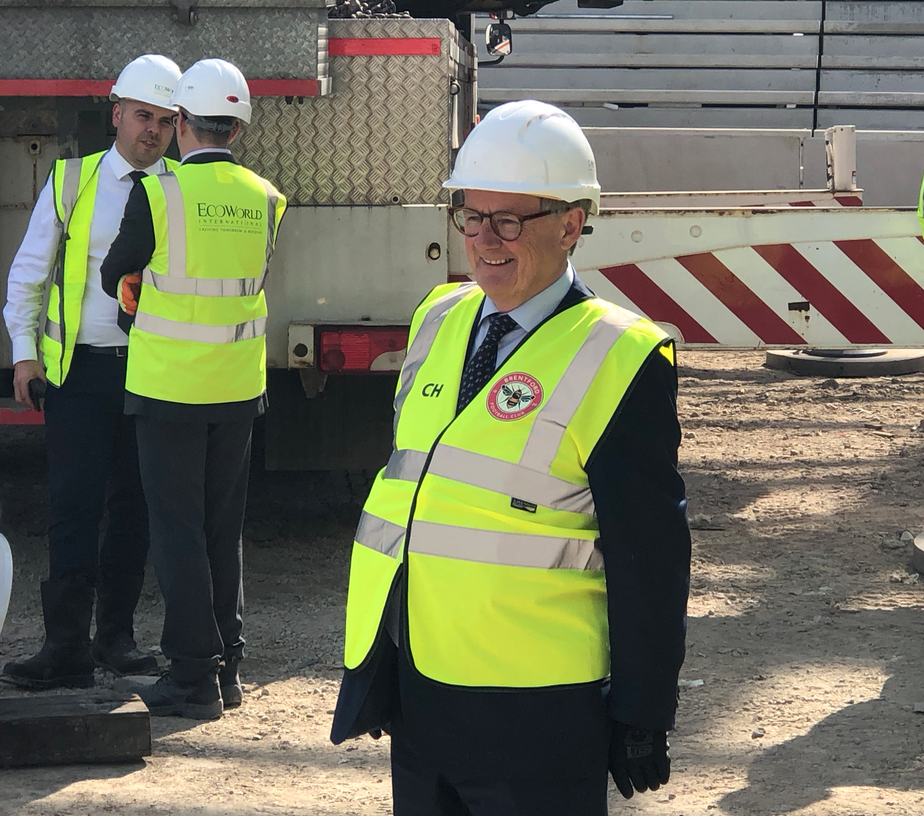 His job is to deliver a new stadium that Brentford supporters will be proud of but very few Bees fans know his name or what he looks like. We got a rare sighting of Conor Hayes in the  photographs of the Golden Bolt ceremony which marked the final piece of the steel frame going into place.
Share |
more

As the Chairman of Lionel Road Developments Ltd since May 2016 he has been at the heart of all the key decisions about the stadium since then.

At a meeting with local residents groups a year later he explained that he had been brought in by Matthew Benham ‘to reduce the risk on the overall project and make it happen, in particular looking at the changes in the political, financial and technical standards landscape that have impacted the project since the original planning permission in June 2014’. He had reviewed the plan for ‘the optimal size for the stadium; mix of seats; future-proofing in relation to broadcast and technology; range of facilities required; and the best way to ensure robust construction and delivery’. As a result a number of changes to the plan were made: the capacity was reduced from 20,000 seats to 17,250 and the facilities for the Community Sports Trust were moved to an adjoining building.

Conor Hayes, 64, trained as an accountant in Ireland and has a wide background in business. In 1991 he became Chief Executive of Ryanair when the airline was in a critical condition and still losing money. The biography of his successor, Michael O’Leary, says Conor Hayes was ‘a thirty-five-year-old who had spent the previous five years reviving the fortunes of a food company in Saudi Arabia’ and knew little about Ryanair when he joined… His expertise was and remains instilling financial discipline in troubled companies and nursing them back to health – a company doctor in all but name’.

O’Leary and Hayes became a double act, one contemporary is quoted as saying ‘Michael was the bad cop and Conor was the good cop… Both of them were cost cutters, they were accountants looking at how to make the bottom line work for them’.

O’Leary’s biographer, Alan Ruddock, wrote: ‘For Hayes, Ryanair was his chance to prove to the Irish business world that he was a force to be reckoned with. He did not see it as a long-term post – he signed a two-year contract and had no intention of extending it – but it gave him the opportunity to showcase his talents’.

Conor Hayes moved on to various businesses from private equity to mobile telecoms and even  mushrooms. He then spent eleven years at the Irish broadcaster RTE. In 2013 he began creating a ‘portfolio’ of non-executive and advisory roles and that is how he later took up the post of ‘corporate adviser to Matthew Benham’. This led to him being given the challenge of delivering Brentford’s new stadium.