One of Brentford’s all time fan favourites Peter Gelson has died aged 79. The centre back was with the Bees from 1960 until 1975, playing more than 500 games. Bees historian and BU Contributing Editor Greville Waterman has written this very personal tribute.
Share |
more

Like every Brentford supporter of a certain vintage, I was deeply saddened and indeed, devastated, to learn today of the death of one of my earliest heroes, Peter Gelson.

I thought long and hard about how to commemorate him and decided that rather than just write an anodyne account of his career and reflect that the 516 games he played for the Bees puts him behind only Ken Coote and Jamie Bates in the all-time Brentford appearance list, mention his ability to outjump the tallest centre forward – with the notable exception of Aldershot’s Jack Howarth – I decided that I would simply include this wonderful photograph of the Brentford team that won promotion from the Fourth Division in 1972. 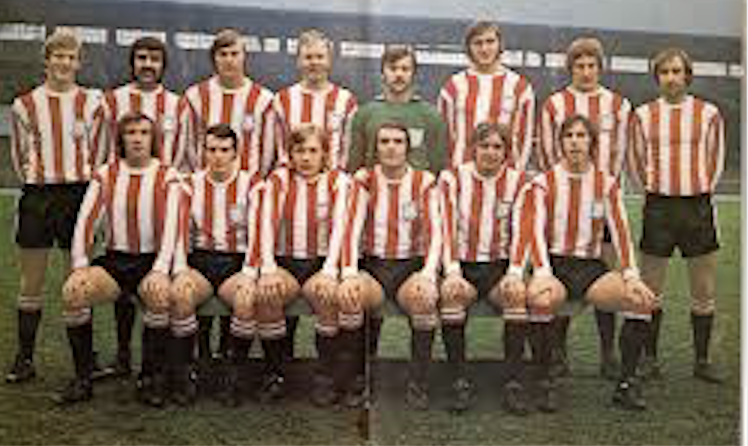 Because even now nearly 50 years later it gives me goosebumps and makes me feel nostalgic for a lost age and Peter Gelsonwas an integral part of a squad that embodied and exemplified everything that is right about football and community.

Oh, and just look at those haircuts and sideburns too!

It was also the first time since I started supporting them six years earlier that a Brentford team actually won anything.

Under the managership of the wily Frank Blunstone, Brentford became a team to reckon with.

Hard, tough and mean at the back where Gelson and Alan Nelmes, who played a mere 316 games for the club, formed an almost impassable central defensive partnership. Nonstop running and harrying in midfield and real quality and vision up front plus the aerial threat and battering ram that was John O’Mara.

What a team, and but for the club’s decisions to cash in on Roger Cross and a year later, John O’Mara, who knows how high we could have climbed rather than crashing and burning and returning immediately to the bottom division.

Amazingly given today’s move towards squad rotation Brentford only used eighteen players throughout the entire season of whom four made a mere twenty-four appearances between them.

In fact, eleven of the squad played over thirty times so there was a consistency of selection and a determination to grit your teeth and play though injuries.

All names to conjure with, and OK, I will admit it, they are still heroes to me.

No wonder that team was successful given the grit, character, determination and of course, skill that it possessed.

But they also possessed another quality, something intangible, something that no amount of money could buy – loyalty allied with their love of the club

Between them the twelve players mentioned above played a total of 3,338 games for the club and stayed at Griffin Park for 94 years.

Another surprising statistic is that no current Brentford player has been with the club for more than four years.

Of course the game has changed beyond recognition from what it was fifty years ago, and in many cases for the better.

The modern-day player is far more likely to move on quickly given freedom of contract and the desire to better himself both professionally and financially, whereas in those days there was generally no financial incentive to do so. Peter Gelson might well have had opportunities throughout his long and successful career to move on, but given the circumstances, why should he have left a club, situated close to home, who valued his services and whose fans adored him and supported him with two testimonials?

When I helped compile The Big Brentford Book Of TheSeventies several years ago, Dave Lane, Mark Croxford and I invited some of our heroes to a launch event at the club.

Knowing how awkward and difficult some present day players are reputed to be, we were all very concerned about whether anybody would show up.

Even the reclusive John O’Mara, who generally keeps himself to himself was there and had a great time. In fact we had players asking us if they could come!

What struck me was how grounded, modest and pleasant all of them were – and how much Brentford meant to them.

They were, without exception, totally delighted to be remembered and were happy to talk with supporters and remember past times.

Alan Hawley even came up at the end of the evening and thanked us for inviting him. He really didn’t realise that the honour was all ours and that we were privileged to be in the same room with him.

It was a night that made me proud to be a Brentford supporter and reminded me, yet again, of what a great club we have.

Togetherness off the pitch and a strong team spirit generally translate to success on it and they’re both traits that we stillhave in abundance today.

Peter Gelson and the rest of these immortal names from the past will always be a hero to me, he was a perfect embodiment of what Brentford representsand I feel as confident about the future of this club as I am proud of its past.

As for Peter Gelson, his memory and example and what he represented will live forever.